The pet store for all your name brand pet needs

Budgetpetcare is an exclusive pet store that’s online offering a huge range of pet supplies with  unbelievable prices. If you’re looking for a pet store that has all your needs taken care of budgetpetcare has You covered.They are one of the internet most trusted online stores of cat and dog supplies, but they don’t just carry supplies Just for Cats and Dogs.They also carry products for horses and birds.

And this pet store budgetpetcare has products and remedies for your pets anxiety, joint pain, digestive problems and skincare. Just pet store site is very straightforward and easy to access for all your pet needs and care.This pet store has been in business for more than 5 years now and has many happy and dedicated repeat of customers. Budgetpetcare is the pet store that has a dedicated customer service team and even an on-site vet to make sure you’re getting the safest and most authentic products.

Even if you can’t find or don’t know quite what you’re looking for. Budgetpetcare has a wonderful staff that will do everything they can to make sure you’re getting the right supplies for your pets. They don’t do online advertisements like pay for commercials and Facebook and Instagram. They save money by not doing a lot of advertisements. So they pass the savings on to their customers there’s only a few pet stores that do that Online.

Nice thing about having an online pet store is the convenience you don’t have to run to the pet store. Look around you can do this all from the comfort of your own home. Even On vacation or something like that. Budgetpetcare also has completely free shipping on every order so you’re saving money there. They run special offers daily and discounted prices on name brand products. There’s a link at the bottom of this page that will take you right to the official  pet store of budget pet care.

Here are 2 most popular flea and tick medications. Giving you more break down information on both of them 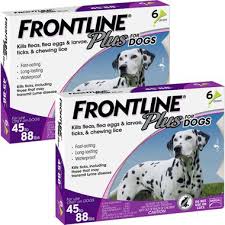 Frontline Plus, a Merial product, claims to kill 98-100% of fleas within 24 hours of topical application (though it doesn’t give a time frame for ticks). It treats adult fleas and fleas in all stages, including eggs, larvae, flea allergy dermatitis, thereby breaking the flea cycle. It contains two tough killing ingredients:

Fipronil kills adult fleas and ticks by collecting in the oils of the hair follicle and releasing them onto the skin and coat.
(S)-methoprene kills flea eggs and larvae.
The formula also guards against sarcoptic mange and lice, is waterproof, and protects your pup for up to 30 days. Plus, Frontline never expires so long as you store it according to package instructions. Frontline Plus is safe for puppies over eight weeks.

Frontline Plus is slightly less expensive than Advantage II and protects both against fleas (in their various stages) and ticks (whereas Advantage only treats fleas and is more costly). 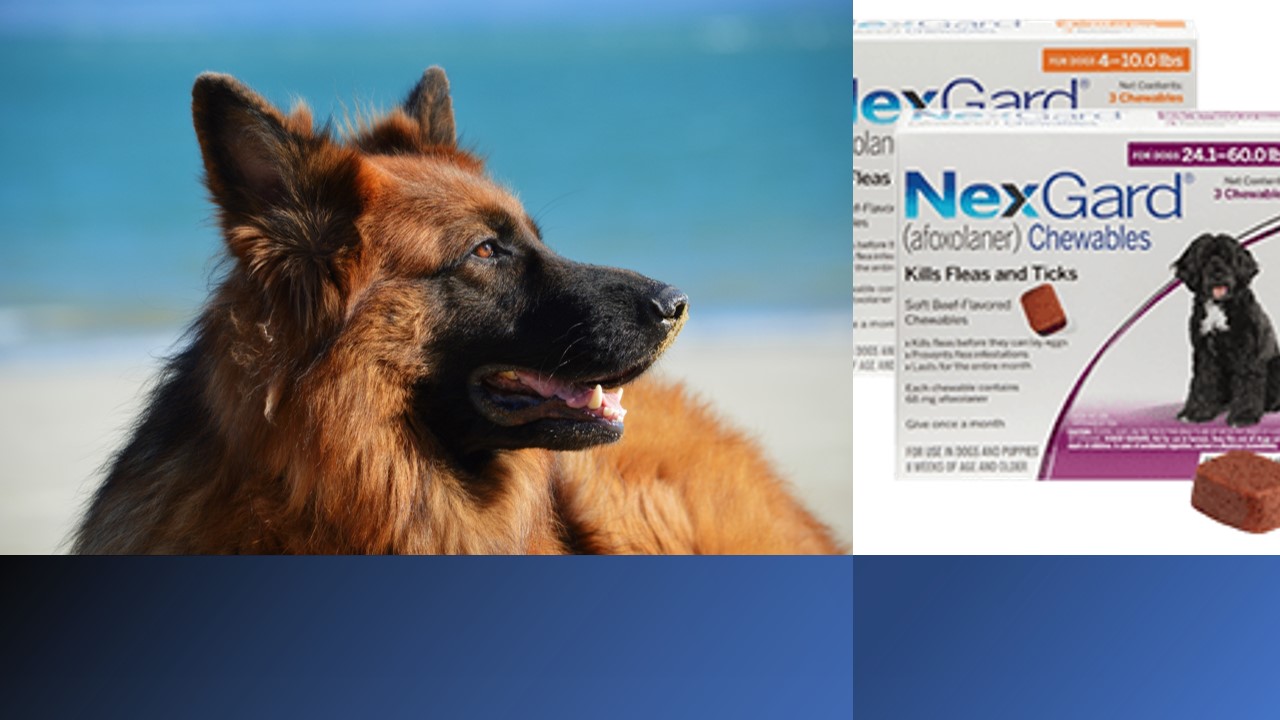 NexGard Flea & Tick Chewables for dogs is a brand new, revolutionary flea and tick preventative from the makers of Frontline®, the #1 choice of veterinarians. It’s the first flea and tick killer of its kind because it comes in a yummy, beef-flavored soft chew that protects your dog from flea and tick infestations for a full 30 days. That means you no longer have to worry about messy topicals or accidentally washing it off your dog while bathing! It can be given with your dog’s heartworm medication without interruption for your convenience.

NexGard keeps your pet protected from adult fleas by killing them before they have a chance to lay eggs, which reduces the possibility of a flea infestation. It also kills the American dog tick, which decreases the risk of your pet developing a deadly tick-borne disease.

When a flea or tick attempts to feast on your pet’s blood, Afoxolaner acts on their Central Nervous System by impeding an important neurotransmitter, which causes instantaneous death. This means your pet receives amazing protection in one tasty morsel! NexGard is a prescription-only medication, so talk to your veterinarian about using it for your pet. 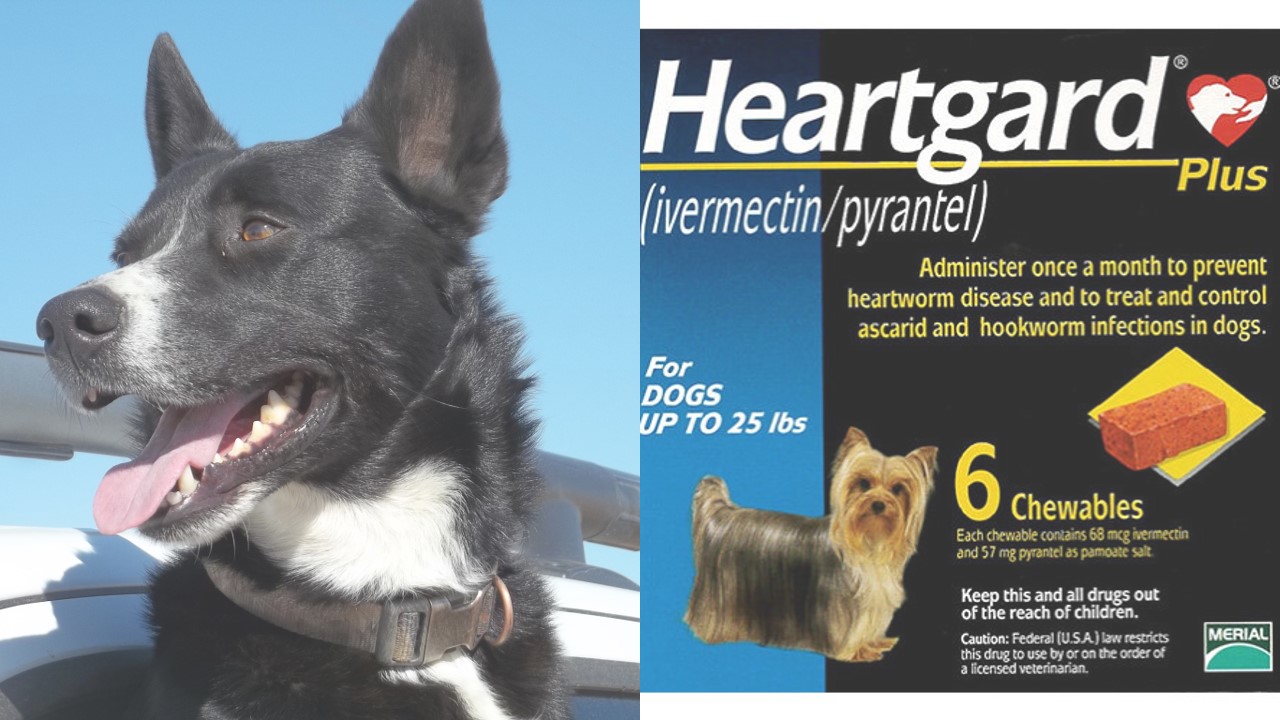 What is Heartgard Plus and What Is It Used for?

Mosquitoes are a constant nuisance to pets and their owners. but they can also pose a serious threat as vectors that spread deadly parasites. In fact, mosquitoes play a vital role in the lifecycle of heartworms. As heartworms must pass through mosquitoes while in their larval stage before they can mature to adulthood in a host animal. Once the worm has passed through the insect and entered your pet’s bloodstream. The parasite can reproduce and cause lasting damage to vital organs.

If left untreated, a heartworm infestation will progress into what known as heartworm disease. This term describes a group of symptoms that affects pets when large heartworms begin to cause significant damage to an animal’s vital organs. This damage can lead to severe lung disease, heart failure, and ultimately death. Heartgard Plus offers protection against heartworms and works to kill heartworms before they pose a serious threat to your pet’s health.

Heartworms are capable of living in a wide variety of host species as microscopic microfilaria in the blood stream. The microfilariae then linger in the blood stream until a feeding mosquito happens to consume the infected blood. Once in the mosquito, they require 10-14 days to develop into infective larvae before transmitted to another animal when the mosquito feeds again. Once inside a host animal, the worms will take approximately 6 months to mature into adult worms.

Infected dogs will not initially exhibit symptoms; though if left untreated, they will likely experience a persistent cough, fatigue, inappetence, and weight loss. Should the infestation progress, they will also develop a swollen stomach due to an excess of fluids in their abdomen. Dogs at this stage may also experience heart failure, as the worms begin to create life-threatening blockages in the heart. These dogs are said to be suffering from caval syndrome.

Caval syndrome refers to the advanced stages of a heartworm infestation in which the parasites obstruct the vena cava, causing serious complications in your pet’s cardiovascular system. The syndrome marked by a sudden onset of heavy breathing, pale gums, and dark or bloody urine. These symptoms indicate that a dog is in need of emergency surgery to remove the heartworms. Without immediate surgery, it is highly unlikely that a dog suffering from caval syndrome will survive.

How Heartgard Plus Works

Heartgard Plus combines two medications to prevent infestation from three types of parasites that commonly affect dogs. The formulation includes ivermectin to prevent the growth and development of heartworms, ensuring that they never cause your dog danger or discomfort. Though ivermectin is also the active ingredient in Heargard, Heartgard Plus stands apart through its inclusion of Pyrantel Pamoate, which treats and prevents both roundworm and hookworm infestations.

Both worms can cause diarrhea, anemia, weight loss, and fatigue in infected dogs. Due to the similarity of their symptoms Hookworm and roundworm infestations can mask the early signs of heartworm disease. Aside from this confusion, hookworms can themselves prove fatal in younger dogs. The worms enter puppies either through direct ingestion from the environment or through the skin. Once inside a dog, different species of hookworms will cause different symptoms with the most dangerous species causing potentially fatal levels of blood loss in puppies.

Roundworms transmitted before birth and inhabit an animal’s intestines, where they swim freely. These worms are the most common parasitic worm found in dogs and can require several treatments to exterminate from your pet. Though these worms do not pose a threat to your dog’s life, they do pose a threat to you and your family. Roundworms can be spread from an infected dog to a human with children and pregnant women being the most susceptible to infection.

Heartgard Plus works to eliminate all three parasites and to prevent future infestations for a full month after each dose. The medication is also easy to administer, as each chewable tablet features a palatable beef flavor that dogs love. The monthly medication can also be given to your pet year-round to ensure that your pet stays safe from worms at all times. However, a prescription from your vetnarian to purchase and use Heartgard Plus.

The similarity of symptoms between infestations of heartworms, hookworms, and roundworms can make it difficult to tell which parasite is affecting your pet. Though Heartgard Plus treats all three types of infestations, there are other dewormers available that treat only hookworms or roundworms. Because Heartgard Plus requires a prescription. It may be easier to use these other treatments for dogs that only have hookworms or roundworms.

Many dewormers that are available over-the-counter eliminate both hookworms and roundworms. Because of the different protocols for different infestations. It’s important that you know the exact condition of an infested pet before attempting to provide treatment. Your veterinarian can determine if your pet needs heartworm medication or you can test for heartworms at home with an antigen test kit.

It’s also important to be aware of the risks associated with Heartgard Plus before administering the medication to your pet. For example, collies and other herding dogs are known to have adverse effects to high levels of ivermectin. Pets with known allergies to ivermectin or to pyrantel. May also require a medication that uses different active ingredients to eliminate parasites.

Aside from these cases, side effects of Heartgard Plus are rare when administered correctly. In the rare case that a pet experiences adverse effects from the medication, they may exhibit dilated pupils, tremors, and loss of body weight. Side effects with improper usage and can potentially be fatal. So it’s also crucial that you follow your veterinarian’s direction exactly when using Heartgard Plus.

Using this medication appropriately also means administering the correct dosage to your pet. Each package comes in a formula that is ideal for dogs in a particular weight range. The chewable tablets should be administered once per month and must not be swallowed whole by your pet. If your pet does receive an overdose, indicated by vomiting, diarrhea, and incoordination. Then it is vital that you seek emergency veterinary medical treatment immediately.

We hope that this article as fully explained the benefits and protections offered by Heartgard Plus, as well as the risks associated with it.

Budgetpetcare is one of the top pet stores that’s online. One nice thing about them is that if you’re not quite sure how to treat or what you need to get for your dog. They have a very friendly staff that will assist you the best they can. It’s also convenient that it’s online. You can do it in the comfort of your own home. They have such a large selection of inventory it’s unreal. So there should be no issues on you finding what you need for your fur baby. 100% free on all you’re shipping.

Believe it or not this is one pet store you should consider ordering from. Free shipping is always a plus. So if you’re looking for a pet store that’s online that’s very friendly. Easy to order from with free shipping this is one you may want to consider. If you click on the link below it will take you to their official website. Where you can get your shopping done and get all your pet needs fulfilled. Happy shopping everyone.

Success! Now check your email to confirm your subscription.